Hello bloggers today's card is a simple card consisting of chipboard elements and some patterned paper. 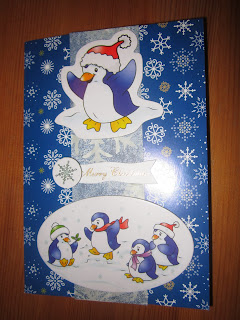 This card began as a pre-printed card blank which has a snow scene on one side and a snowflake background on the other.  I chose to use the snowflake background as the front of my card which is 6x4 in size.  First I cut a strip of snowflake patterned paper and  adhered it down the center of the card.  Next I added a chipboard topper of a group of penguins to the bottom of the card.  i then added a single penguin topper to the top of the card.  In between these I added a sentiment.  Originally the sentiment has a Santa on the corner so I pulled that off and replace it with a chipboard snowflake so it was more in keeping with the theme of the card.