Hello bloggers today's card is a pretty shabby chic easel card.  The first photo is the card when it is closed and the second photo is when it is open 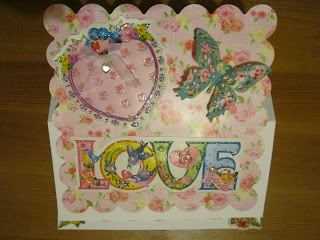 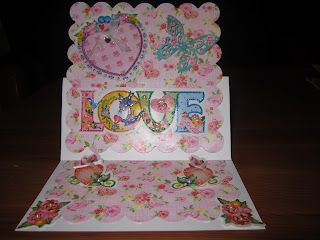 This card began as a 6x6 white hammered card blank.  First I folded the front cover in half to make my easel card.  Next using some vintage papers from my stash I die cut a scalloped square using Spellbinders 'grand scallop squares' die set.  I die cut two of these one for the front of the card and one for the inside.  As the vintage paper was flimsy I die cut another scalloped square out of white card and adhered the paper die cut to it for strength.  This was then adhered to the front of the card.  The embellishments on my card were from my stash and are self adhesive so I attached the heart and love to the front of the card.  The butterfly was die cut using Spellbinders 'les papillions' die set and vintage paper.  This was attached to the card with dries clear adhesive.  Next I added some flower embellishments to the bottom of the card.  The strawberries were mounted up with foam tape to make the stopper for the easel card.


This card is being entered into the following challenges:
Crafty creations challenge 236 - shabby chic
You can check out the details here http://craftycreationschallenges.blogspot.co.uk/2013/08/challenge-236-shabby-chic.html

Charisma cardz challenge 33 - more than one fold
You can check out the details here http://charismacardz.blogspot.co.uk/2013/08/challenge-33-more-than-one-fold.html
Happy Crafting xx Hazel
Posted by hazel young at 06:00