Hello bloggers today we have a Christmas card featuring a mouse made from punches. 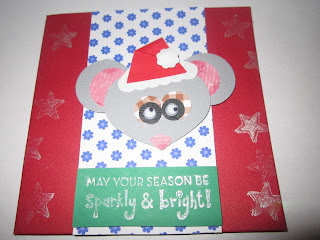 This card has been made using a 4x4 red card blank.  First I cut a piece of patterned cardstock into a strip and adhered it down the centre of the card.  Next using some grey cardstock I punched out the mouse face using Stampin Up 'bauble' punch.  The ears were also punched from the same cardstock using a circle punch.  The hat was made from punching red and white cardstock with the Stampin Up 'petite pendant builder' punch.  It was then layered up and part of the white pendant cut off so that it makes the fur for the hat.  The top was bent over and a punched flower from white cardstock was adhered on the end as the pompom.  Using some pink cardstock I punched out the ear inners using a circle punch.  The nose was hand cut from the same cardstock.  Next I began to layer up the mouse by attaching the ears together and attaching them to the head.    The hat was then adhered to the head also.  Next the eyes were punched from brown gingham cardstock.  These were adhered to the mouse face and googly eyes were added.  The nose was also attached to the face.  The whole mouse was then adhered to the card.  Next I stamped my sentiment using Stampin Up 'sparky and bright' stamp set and  gold ink.  The sentiment topper was then cut to size and adhered to the card.  Finally I randomly stamped gold stars over the cardstock using a star stamp and gold ink pad.