Hello bloggers, posts should be back to normal from today onwards as I made a boo boo with schedule times on blogger and only just realised today.  Hope you like today's scalloped poppy card. 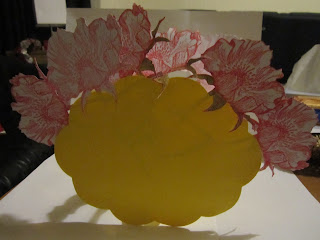 To create this card I began with a piece of A4 yellow card stock and folded it in half die cut it using Spellbinders Grand Scallop dies twice.  Next I adhered the two scallops together to make a pocket vase so only added glue to the bottom half of the vase.  With another sheet of yellow card stock I die cut the stand for my card as it is a non opening card.  The stand was cut using labels 28 die and then scoring the label so that it formed a stand which was adhered to the back of the vase.  Using IndigoBlu 'Poppy Meadow' stamp set I stamped the largest poppy 8 times, some of these were generation stamped but most were not.  This was done to give the poppies different looks.  Next I water coloured the stems and leaves on 3 of the poppies using peeled paint distress ink.  The poppies were all cut out and I inked the edges with a red promarker to disguise the white edges.  The poppies were then arranged in the vase.

This card is being entered into the Indigoblu Challenge 3 - Flowers
You can check out the details here http://community.indigoblu.com/?tag=challenge
Posted by hazel young at 08:00