Hello bloggers, well another weekend is upon us I hope you had a good week and the weekend will be good to follow.  Today's card is a more traditional Christmas card featuring a filigree cross. 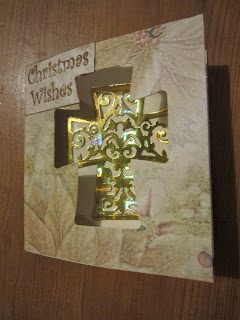 The sentiment was stamped using vintage photo distress ink and Creative Expressions 'robins' stamp set.  This was then cut down to size and the edges inked with the same ink pad as it was stamped.  It was then adhered to the top of the card.  I then cut away the part of the sentiment that over lapped the cross aperture and inked the newly cut edge.  Finally the gold mirror board filigree cross die cut was adhered into place inside the card but inline with the cross aperture on the front