Today's card is a friends card that came about from a play with some Spellbinders and Marianne dies. 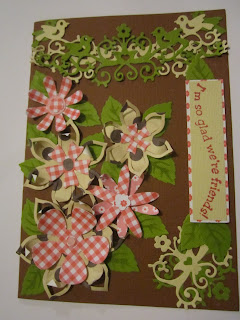 The base card stock is a linen effect brown A4 card scored in half to make it A5 in size.  First of all I die cut from red gingham card some flowers using a wizard die (sorry don't know the name of it).  Then I die cut from brown and beige polka dot paper some flowers using Spellbinders Daisy dies.  These were then layered up using glue and foam pads and adhered to the card front.  The leaves were then die cut using Marianne English Roses dies( using the leaf only) from green card.  I inked through the die using Adirondack Lettuce ink. The leaves were then tucked in underneath the flowers and glued.  The Folklore Birds die by Marianne were used to make the detail at the top of the card.  This was cut twice in cream and twice in green.  One cream die cut was cut in half and adhered to the card at the top.  Then a green die cut was adhered on top to give a shadowed look.  On the other green die cut I cut off the birds and a bit of the swirl to create the shape in the bottom right corner.  This was repeated with the cream card and then they were layered up.  The left over birds were adhered to the top corners.  Finally a sentiment was stamped using Watermelon Adirondack ink pad onto cream card.  This was matted with a red and white floral card and mounted with foam pads to finish off the card.

Hope you like the look of this card.  Happy crafting Hazel x
Posted by hazel young at 07:00