Hello bloggers today's card is a simple Christmas card with baubles and a chipboard sentiment and topper combined. 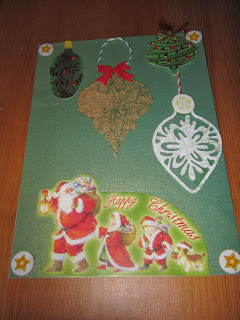 This card began as a white 5x7 card blank.  First I added some green pearlescent paper to the front.  Next I added some pre-made bauble embellishments to the card.  I then added a bauble I die cut using Spellbinders 'heirloom ornaments 2010' die set and some faux leather paper.  I also die cut another bauble from the white card stock that I stamped with a random pattern before die cutting it.  This bauble was die cut using Marianne dies 'bell and bauble' die set.  I added some bakers twine to the die cut baubles and added them to the card.   I attached a red bow to the central die cut bauble and a green snowflake to the other one.   A chipboard sentiment complete with Santa topper was added to the bottom of the card.  Finally I added some chipboard embellishments to each corner of the card.

Sorry the text is a little off I have been having major computer problems today
Posted by hazel young at 06:00